I have always known that I wanted to do everything that I possibly could to breastfeed my children. When I found out I was having twins I wrestled about my decision to breastfeed or not. I was really only thinking about what a challenge it would be, rather than what would be best for my babies.

I believe having support is the number one thing you need when choosing to breastfeed. Surrounding yourself with encouragement goes such a long way, especially when you feel like giving up. I had an incredible amount of support from my husband and my mother, and without it I might have chose differently.

I spent many nights during my pregnancy watching YouTube videos of how to tandem feed, read countless articles about breastfeeding, took classes and spoke to as many twin mama’s, for advice, as I could find!

As much time as I spent learning all that I could, pre-baby, I was convinced that I would have it all under control. Little did I know my journey would not be as easy as I had hoped.

My colostrum started coming in at just 16 Weeks! I remember waking up with a huge wet spot on my shirt. Even though I was wearing breastpads months before I began nursing, I was relieved to know I would not have an issue with my milk coming in.

The morning that the babies were born I was so exhausted after my delivery all I could do was sleep.

I knew from the beginning that nursing was not going to be easy, especially now since the babies were premature. (They are oftentimes too weak, or not well enough to nurse) However, this motivated me to persevere, because I knew they needed it now more than ever!

Both Harlow and Myles had a lot of trouble latching. We tried multiple postitions, different pillows and even nipple shields.

After a night of failed latching, and A LOT of pumping. We decided to try cup feeding. This was something completely new to me. What it is is a small cup, like what is used to measure medicine. You then sit the baby upright and they will suck directly out of it. This helps to stray from nipple confusion. (It is recommended to wait at least 4 weeks to introduce bottles and pacifiers)

At this point, (2nd day post) my milk had not come in, and I was not producing enough colostrum for both of them, so we had to supplement with 5 mL of formula mixed with the colostrum I pumped. (Totaling 10mL each)

Having to use formula was devastating to me. It made me feel like I was already failing motherhood, because my body was not providing enough for my tiny babies. I knew that I could not stress about it too much, because I did not want to harm my milk supply even more.

By the grace of God I woke up the next morning with a much heavier chest! I grew 3 cup sizes overnight. I was so relieved that my milk had come in, and we could quit feeding them formula, because I was definitely making enough for both of them! We continued to practice feeding every 2 hours. I was pumping after each feeding to make as much milk as possible, and to fill their cups, which were now only used if they had an unsuccessful latch.

By the 4th and final day at the hospital we left with confidence in our breastfeeding and cupfeeding routine. Unfortunately our first night at home the babies were not latching, and I felt like we were taking so many steps backwards.

The babies were waking up an hour after they finished eating to eat again. They would attempt to feed for an hour, and then would cupfeed for 30 minutes. At this point I was not tandem feeding, because I needed my other hand to help them latch. (We started tandem feeding at 2 weeks) So the process was taking close to three hours. (Roughly 1.5 hours each)

My nipples were cracked and bloody from incorrect latching, and I could not just feed from the other breast because I was feeding two. I was 5 days in and already felt like I was reaching my breaking point. (Plus hormones)

At the end of the first week with the twins they met with the pediatrician. We were told to give the babies a bottle at night, with my milk, to top their tummy’s off before bed. This was just a way for them to gain more weight, plus it allowed dad to have some bonding time. This suggestion from the doctor was given to make things easier on us, but it ended up taking longer because they did not like drinking from the bottle. We tried the bottle for a few nights in a row, but they never drank more than 1 mL or 2 in a 30 minute period.

However, over those few days the babies had really started to get the hang of breastfeeding, so we quit trying to use bottles. They started sleeping longer stretches, and started gaining a lot more weight! WHAT A RELIEF!

I thought we were in the clear, and things would only be improving from this point on. However, three weeks into breastfeeding I got mastitis. Mastitis is a very painful infection in your breast tissue. This can happen from a few different things: engorged breasts, maybe your milk came in too quickly, or your breasts not emptying properly.

My breasts were not fully emptying. (I had quit pumping just a week prior) I knew I had mastitis because my breasts were blotchy red, and hot to the touch! Unfortunately, the infection resulted in a high fever, so I was given a prescription rather than a natural remedy. Mastitis is so unbelievably painful. I would not wish it upon anyone! Really the only way it was going to heal was if I continued nursing, (which I was already doing because Harlow had jaundice) and within a few days the infection was gone, but I experienced latching pain for weeks after!

At about 1 1/2 months of nursing my nipples had finally callused over, and I was pain free. The babies really had the hang of nursing, and tandem feeding saved so much of our time. 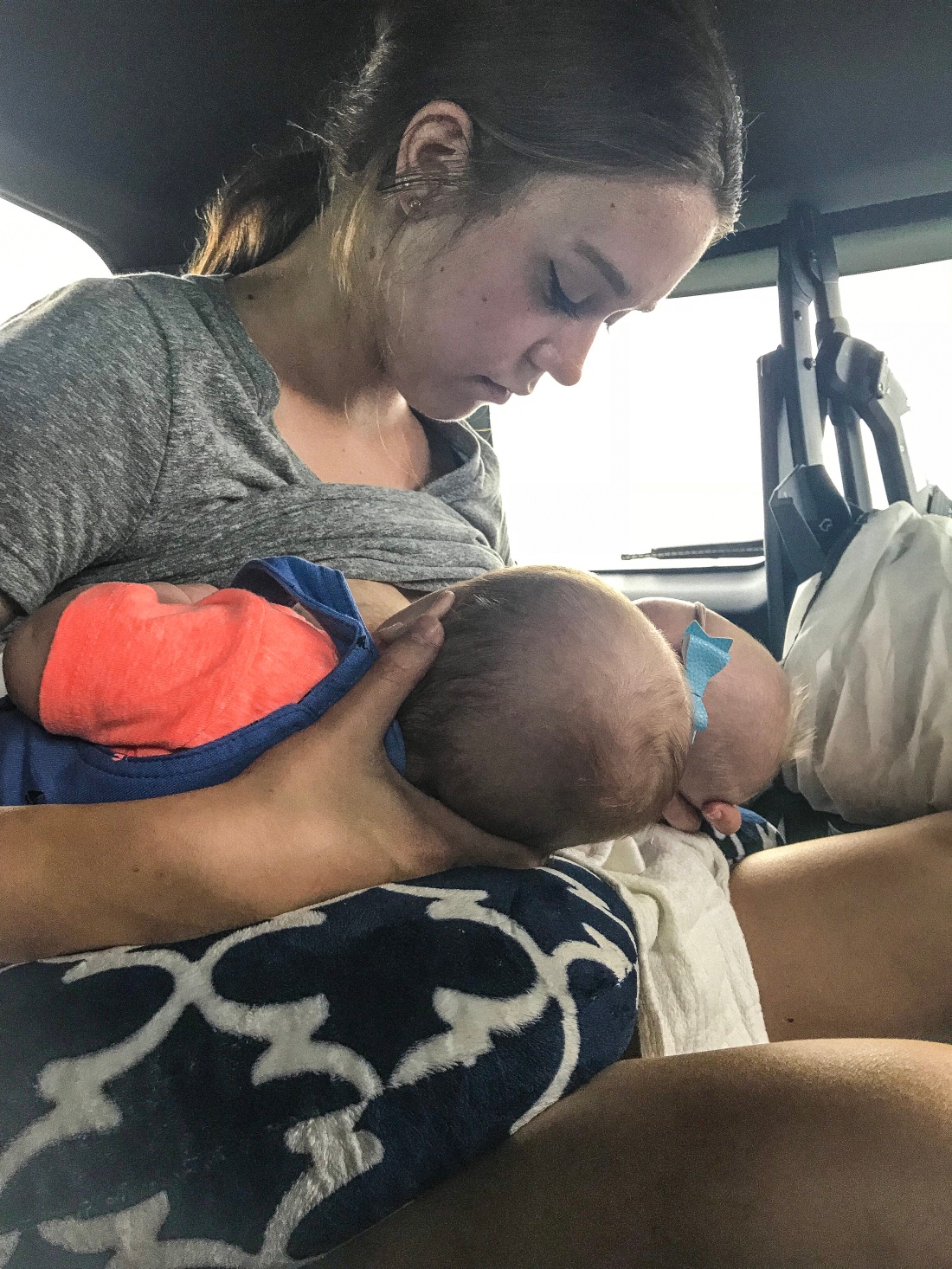 The first month or so of breastfeeding, for me, was really painful. Through the blisters, fevers, cracks and sores I might not have loved every minute of breastfeeding, but that one month of pain is so small compared to the months of enjoyable bonding time, and lasting benefits it will give to my babies.

Fortunately I was very aware that it does not come naturally for most, and it is a learning process that takes time for both the baby and mother. Your journey may not come easy, but I promise you that it will get better, and it will be so rewarding for everyone involved! 🙂

Here are a few of my favorite breastfeeding products!

I do not know what I would do without this pillow! Not only do I nurse with it, but now that the babies are getting older it has served us with so many other uses!

I used this cream when the babies ate, because it is food based.

I used this cream when I took a shower.

One of the best bottles to avoid nipple confusion, with its award winning nipple!

This is my all time favorite hands-free pumping bra!

Hi Friends! I am a creative, and energetic stay at home mom of boy/girl twins! ❤️ I started this space as a creative outlet to share what I am learning through my motherhood journey, ( in hopes to teach, or inspire another mama) and now it is turning into more of my lifestyle! I love sharing updates on my twins, favorite recipes, health & exercise, home decor, affordable fashion, and Amazon finds! (There is something sure to please everyone 🥰) I am so happy that you are here, and I hope you feel welcome! ❤️ View all posts by Twin Mama Chronicles